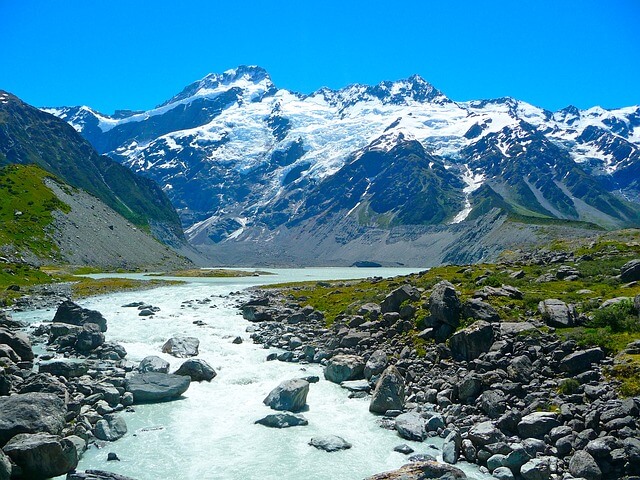 Among other things, New Zealand is known all over the world for its exuberant natural beauty. This remote country, located 1200 miles southeast of Australia, is made up of two main islands: North Island and South Island and a group of smaller islands around them. When talking about the natural beauty of this wonderful country, it should be mentioned that one of the main roles is played by the 13 New Zealand national parks. They cover an area of more than 7,400,000 acres of the entire national territory.

Three of the NZ national parks are located on the North Island and ten on the South Island. Thanks to the biogeography of its territory and its maintenance as a protected area, at present they are the habitat of numerous species of plants and autochthonous animals. Today, New Zealand’s national parks represent one of the country’s main tourist attractions, receiving more than 2 million visitors a year. For all the reasons mentioned above is that we invite you to plan your next vacation in New Zealand and to help in its organization we present a top 5 of their national parks.

Tongariro National Park is located in the center of the North Island. It is a protected area since 1887 and is the oldest park of its kind in the country.

In its almost 200,000 acres of surface harbors impressive landscapes starring the largest active volcanoes on the island: the Tongariro, Ngauruhoe, and Ruapehu. Equally, within its extraordinary beauty stand out its lakes with turquoise waters and its numerous thermal springs.

Typical New Zealand national parks visitors are those who enjoy direct contact with nature. In this case, those who decide to visit it will be able to choose between varied recreational offers to spend an unforgettable day enjoying its facilities. Both in summer and winter season are organized activities suitable for each season. Many prefer mountaineering, cycling, hunting, fishing, skiing or snowboarding. However, the most popular activities in the park are the routes that travel through it. You should try the Tongariro Crossing which will take you to discover its best-kept treasures.

Mount Aspiring National Park was the tenth park in New Zealand to be created, in 1964. It is located on the South Island and has an area of 800,000 acres. It receives its name from Mount Aspiring which, due to its 10,935 ft above sea level. This mountain is the second highest mountain in the country. However, within the park also lie other elevations almost as high as this: Mount Pollux and Mount Brewster.

In order to enjoy the park to the maximum, a series of exciting activities are available to visitors:

Among them, the most attractive for hikers are the short trails and routes Routeburn, Wilkin Valley and the Circuit Rees-Dart Track. The latter, although longer in length, give those who make them the opportunity to travel through the valleys that make up the park and enjoy all its charms more closely.

Many people consider Mount Aspiring National Park an earthly paradise. Its impressive landscapes are formed by wonderfully imposing mountains, waterfalls, and rivers that run glacial waters and splendid valleys. These valleys invite you to enter the deepest part of its environment. Here an impressive number of species of plants and animals are in their natural habitat within New Zealand.

Abel Tasman National Park is one of the most idyllic places you can visit in New Zealand. Its 56,800 acres extend over the territory of the country’s South Island. It was founded in 1942 as a tribute to the 300 years of the arrival of explorer Abel Tasman to these lands.

It is an enchanting place, that enchants the visitors since they discover the beauty of its environment conformed by virgin beaches and an exuberant natural environment. Despite its paradisiacal beaches, it has beautiful and lush forests. In Abel Tasman National Park forests you can appreciate the typical vegetation of the place and discover the environment where native animals of New Zealand live as the kiwi.

One of the park’s most popular activities is the Abel Tasman Coastal Trail, included in the Great Walks in New Zealand. This complete tour lasts from 3 to 5 days and allows hikers to discover the park’s most beautiful spots. If you don’t have all that time you can choose to do it in sections and shorten the experience. Another way to get to know the park is to do it on your own by following the trails marked in the territory or renting aquatic equipment such as kayaks and venturing through it.

The Fiordland National Park is also located on the South Island. It’s the largest protected area in the country, covering an area of about 3,100 acres. Nature has recreated a scenery of incomparable beauty in this park. Many arrive seduced by the postcards with images of their landscapes however, witnessing them personally has no comparison.

In this extraordinary place, visitors will have access to an unsurpassable spectacle. Here, fjords, waterfalls and snow-covered mountains form an atmosphere that seems to be part of a fantasy movie.

Due to the impressive beauty of its surroundings, the Milford Sound Fjord is, by far, its most precious jewel. Considered as the eighth wonder of the world, this separated natural section is capable of dazzling the most skeptical person. On a boat trip through Milford Sound you will discover the most intense colors of nature. You will also see stone masses that are so high that they seem to touch the sky.

You should also know that there are other possibilities to make the most of your stay. Those include kayak rentals, cruising, and diving.

We can’t fail to include Aoraki National Park in the top 5 New Zealand National Parks. Hosting the worldwide known Mount Cook, this magnificent place is a protected area with the aim of preserving its biological species. Mount Cook is the highest mountain in New Zealand with its 12,349 ft.

In the Aoraki National Park, you can find the longest glaciers in the country, covering almost half of its territory. One of the features that most attracts alpinists is that the park is home to almost all of New Zealand’s highest mountains. The most popular among climbers are the Sefton, Tasman and Hicks mountains.

In the park is possible to visit one of the most beautiful lakes in the country: the Pukaki. Formed with glacial waters, this lake offers us one of the best landscapes you will find in the surroundings, with the Cook Mountain in the background and a blue color so intense that we think it has not been created by nature.

Another of the particularities that make this place an incomparable place is its totally starry nights. This is possible thanks to the almost zero light pollution due to the fact that the park is far away from urban areas.

There are many activities you can do to enrich your experience in it. From hiking, mountain biking, skiing or alpinism to scenic flights that will allow you to have a fuller appreciation of the whole territory. You can learn more about on park’s website.

We provide updated information about the introduction and applying of NZ eTA, with the latest announcements and news reports available.